This is a story of how I was able to fix a broken and long forgotten LCD monitor. This is a cheap CTX monitor, but I’ve seen this method work on other brands of monitors and I think it is a pretty common problem.

These monitors cost around $200 new, which was a pretty good price at the time. I think the original warranty covered them for a year or two. What ever it was, it failed shortly after the warranty expired, which is typical for many electronics.

I’ve seen several of them fail in the same way, first it starts blinking on and off for a few seconds until it warms up, then works fine. After a few days it starts taking a few minutes to “warm up”, then finally it never stays on and just blinks on and off forever.

After replacing it and forgetting about it on a shelf for months (years?) I wondered how hard it would be to get it working. I did a little googling and found a site where someone said the capacitors in the power circuit often fail and simply replacing them cured the problem. Capacitors are cheap, so I thought, “why not?” and gave it a go.

This monitor wasn’t hard to break in to. First, remove the screws holding on the foot and the back and pop the side clips apart with a screwdriver.

Then there are four screws holding on a cover over the circuit board.

Here is a closeup of the section of the power board with the capacitors that will be replaced. It’s hard to tell from this picture, or even in real life, but a couple of them are bulged a little. This is normally a sign of a bad capacitor when the top bulges and sometimes splits. Usually it’s very obvious, but it was very hard to tell with these, so I wasn’t even sure if this would fix my problem, but I tried anyway.

Here are the six capacitors I removed. To find replacements, just look on the sides for the voltage (v) and capacitance (uf) rating, then search for replacements on mouser.com or some other electronic component site.

If you look close you can see these two capacitors are bulged a little. I probably could have gotten away with just replacing these two, but like I said, capacitors are cheap and replacing them all at once is easier than replacing one, put everything back together, test it, take it back apart, replace another one…

Here is a new capacitor next to the two that are bad. Can you tell the difference?

And like magic, after soldering in the new capacitors, and screwing it all back together, I have a monitor that works like new! 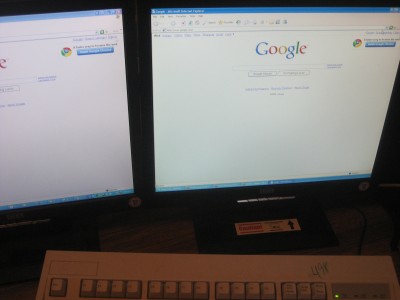 Have you repaired a monitor using this method or any other method? Let me know below!

2 replies on “Fix an LCD Monitor”